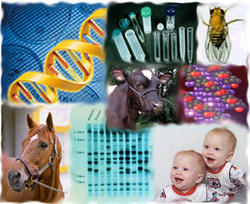 Genetics (from Ancient Greek γενετικός genetikos, "genitive" and that from γένεσις genesis, "origin"),[1][2][3] a discipline of biology, is the science of genes, heredity, and variation in living organisms.[4][5]

Genetics deals with the molecular structure and function of genes, gene behavior in context of a cell or organism (e.g. dominance and epigenetics), patterns of inheritance from parent to offspring, and gene distribution, variation and change in populations,such as through Genome-Wide Association Studies. Given that genes are universal to living organisms, genetics can be applied to the study of all living systems, from viruses and bacteria, through plants and domestic animals, to humans (as in medical genetics).

The fact that living things inherit traits from their parents has been used since prehistoric times to improve crop plants and animals through selective breeding. However, the modern science of genetics, which seeks to understand the process of inheritance, only began with the work of Gregor Mendel in the mid-19th century.[6] Although he did not know the physical basis for heredity, Mendel observed that organisms inherit traits via discrete units of inheritance, which are now called genes.

Genes correspond to regions within DNA, a molecule composed of a chain of four different types of nucleotides—the sequence of these nucleotides is the genetic information organisms inherit. DNA naturally occurs in a double stranded form, with nucleotides on each strand complementary to each other. Each strand can act as a template for creating a new partner strand. This is the physical method for making copies of genes that can be inherited.

The sequence of nucleotides in a gene is translated by cells to produce a chain of amino acids, creating proteins—the order of amino acids in a protein corresponds to the order of nucleotides in the gene. This relationship between nucleotide sequence and amino acid sequence is known as the genetic code. The amino acids in a protein determine how it folds into a three-dimensional shape; this structure is, in turn, responsible for the protein's function. Proteins carry out almost all the functions needed for cells to live. A change to the DNA in a gene can change a protein's amino acids, changing its shape and function: this can have a dramatic effect in the cell and on the organism as a whole.

Although genetics plays a large role in the appearance and behavior of organisms, it is the combination of genetics with what an organism experiences that determines the ultimate outcome. For example, while genes play a role in determining an organism's size, the nutrition and health it experiences after inception also have a large effect.