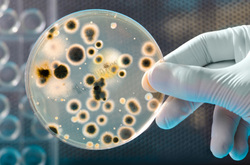 Microbiology (from Greek μῑκρος, mīkros, "small"; βίος, bios, "life"; and -λογία, -logia) is the study of microscopic organisms, which are defined as any living organism that is either a single cell (unicellular), a cell cluster, or has no cells at all (acellular).[1] This includes eukaryotes, such as fungi and protists, and prokaryotes. Viruses[2] and prions, though not strictly classed as living organisms, are also studied. Microbiology typically includes the study of the immune system, or immunology. Generally, immune systems interact with pathogenic microbes; these two disciplines often intersect which is why many colleges offer a paired degree such as "Microbiology and Immunology".

Microbiology is a broad term which includes virology, mycology, parasitology, bacteriology, immunology and other branches. A microbiologist is a specialist in microbiology and these related topics.

Microbiological procedures usually must be aseptic, and use a variety of tools such as light microscopes with a combination of stains and dyes.The most commonly used stains are called basic dyes, and are composed of positively charged molecules. Two types of basic dyes are simple stains and differential stains. Simple stains consist of one dye and identify the shape and multicell arrangement of bacteria. Methylene blue, carbolfuchsin, safranin, and crystal violet are some of the most commonly used stains. Differential stains on the other hand, use two or more dyes and help us to distinguish between two or more organisms or two or different parts of the organism. Types of differential stains are gram, Ziehl-Neelsen acid fast, negative, flagella, and endospore. Specific constraints apply to particular fields of microbiology, such as parasitology, which heavily utilizes the light microscopy, whereas microscopy's utility in bacteriology is limited due to the similarity in many cells' physiology. Indeed, most means of differentiating bacteria is based on growth or biochemical reactions. Virology has very little need for light microscopes, relying on almost entirely molecular means. Mycology relies on all technologies the most evenly, from macroscopy to molecular techniques.

Microbiology is actively researched, and the field is advancing continuously. It is estimated that only about one percent of the microorganisms present in a given environmental sample are culturable[3] and the number of bacterial cells and species on Earth is still not possible to be determined, recent estimates indicate that it can be extremely high (5 Exp 30 cells on Earth, unknown number of species). Although microbes were directly observed over three hundred years ago, the precise determination, quantitation and description of its functions is far to be complete, given the overwhelming diversity detected by genetic and culture-independent means.