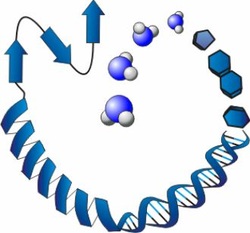 Biochemistry, sometimes called biological chemistry, is the study of chemical processes in living organisms, including, but not limited to, living matter. The laws of biochemistry govern all living organisms and living processes. By controlling information flow through biochemical signalling and the flow of chemical energy through metabolism, biochemical processes give rise to the complexity of life.

Much of biochemistry deals with the structures, functions and interactions of cellular components such as proteins, carbohydrates, lipids, nucleic acids and other biomolecules —although increasingly processes rather than individual molecules are the main focus. Among the vast number of different biomolecules, many are complex and large molecules (called biopolymers), which are composed of similar repeating subunits (called monomers). Each class of polymeric biomolecule has a different set of subunit types.[1] For example, a protein is a polymer whose subunits are selected from a set of 20 or more amino acids. Biochemistry studies the chemical properties of important biological molecules, like proteins, and in particular the chemistry of enzyme-catalyzed reactions.

The biochemistry of cell metabolism and the endocrine system has been extensively described. Other areas of biochemistry include the genetic code (DNA, RNA), protein synthesis, cell membrane transport and signal transduction.

Over the last 40 years biochemistry has become so successful at explaining living processes that now almost all areas of the life sciences from botany to medicine are engaged in biochemical research. Today the main focus of pure biochemistry is in understanding how biological molecules give rise to the processes that occur within living cells, which in turn relates greatly to the study and understanding of whole organisms.